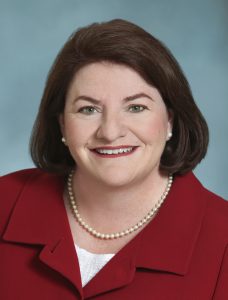 Toni G. Atkins (born August 1, 1962) is an American politician serving as the 51st and current President pro tempore of the California State Senate since 2018. A member of the Democratic Party, she previously served as the 69th Speaker of the California State Assembly from 2014 to 2016. She has represented the 39th State Senate district since 2016, encompassing most of San Diego.

Upon her election as Speaker of the State Assembly, she became the third woman and first acknowledged lesbian to be elected to the position, as well as the first lawmaker from San Diego holding the office. She served on the San Diego City Council from 2000 to 2008, including a term as Acting Mayor of San Diego in 2005. She also served as Acting Governor of California for nine hours on July 30, 2014. In 2018, she succeeded Kevin de León as State Senate President pro tempore. This made her the first woman and the first openly LGBT person to lead the California State Senate.